Though I did not say it in exactly these words, last week I talked about how, for the last several weeks, I have had the work ethic of a chicken. Actually, I bet chickens have a better work ethic than I do.

I really don’t know why I keep talking about chickens. I could talk about sheep! Sheep are fun. Sorta.

So I obviously don’t know what it’d be like to be a chicken, or a sheep, or any other kind of farm animal. But from what I can tell from watching them, they have it pretty easy. I certainly don’t want to be a farm animal. I’m just comparing my situation, to the situation of a chicken. Because, you know, that’s a completely logical thing to do.

Chickens only have a few things they have to do in life. Eat, chase other chickens, eat, breed, and raise their young. My life, on the other hand, seems very complicated. There are a million things that I could do each day. A million web sites I could read. A million books I could read. Which project should I work on? Do I work on my own projects? Or do contract work? 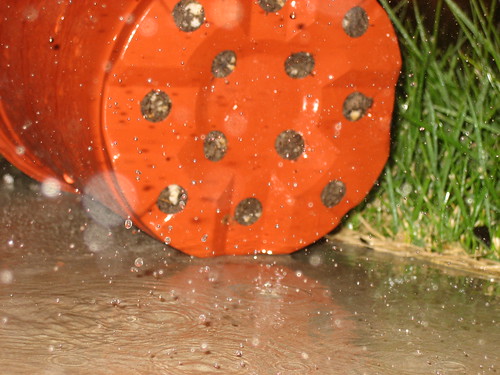 Really though, if I take a step back and try to grasp the concept that my life is really quite as simple as the life of a chicken, I realize that my life is still way more complicated. ha! No really, my day to day focus is “to survive,” just like the chicken’s. But the difference lies in how I think about it. My approach to life is different from that of the common chicken (because there may be uncommon chickens who are really quite perplexed about what to do each day. “do I eat the grain? or maybe chase that bug over there? or maybe learn how to catch the bug and mix it with the grain, put it out in the sun to bake and then sprinkle it with a little bit of grass? and how do I keep the other chickens from eating it before I’m done?”). In other words, I complicate my life by allowing myself to lose focus. 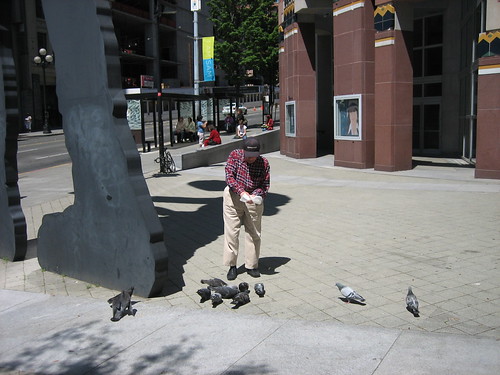 I took this picture a few weeks ago in Seattle, Washington. I was looking for the bus stop for the bus that goes to the airport so I could come back home. Along the way I saw this man feeding a bunch of pigeons. I didn’t think about it then, but looking back on the situation I wish I would have stopped and said hello. Find out who he is, what he does. Does he make it a habit to feed birds fairly often? Or was this something a little more rare that he just decided to do right then? I’ll probably never know the answers to those questions.

But now it sounds like I’m contradicting myself. First I say I should be working instead of writing, and then I say I should have stopped to talk to a guy instead of hurrying on to the bus stop. It could seem as if I’m justifying my time spent writing instead of working. Though they are different examples, I think they illustrate how priorities should be set.

Generally, you should focus your attention on the most important thing in your life; your top “priority.” That’s obvious. But what happens when you’ve lost focus of your goals? While I was hurrying to the bus stop I had the presence of mind to stop and take a picture, but I didn’t think to talk to the guy. After all, I was in a hurry to get to the airport. In other words, when you lose focus of your goals, your priorities get all messed up and you run around looking for meaning, spending all your time on your priorities and getting things done, but you’re still frustrated because your goals aren’t getting realized. Your priorities don’t match your goals.

I love the cinematography (whoa I spelled that right on my first try!) in movies and TV shows where the camera, focusing on one thing/person, switches the focus to someone/something else without changing the field of view. You see one thing, and then you see another, just by a change in focus. Matching up your goals and priorities has the same effect. I have my doubts now, but I’ve seen it work in my life before. I know it can work again. I really need it too. Right now all I see are chickens.

← Thoughts on Perfection
Getting the gist of it: Reading Patterns →
Posted by Ryan Martinsen June 15, 2007