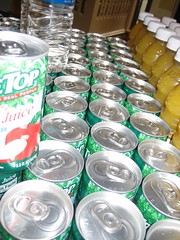 So if you didn’t know, I’m on a swing team. Currently we are called the Salt Lake Jitterbugs, thought that’s likely to change, or not. Website coming soon. Anyway, on Monday of this week we performed at Capitol Theater in Salt Lake City. The occasion was for “From Past to Future: The Israeli Experience.” An Israeli folk dance troupe, Havazalot Netanya Dance Troupe, came to Salt Lake City and performed. And we were the opening act.

Yeah, I know. A swing dance performance was the opening act for an Israeli folk dance concert? I don’t think anyone would match the two up normally, but one of our team members happened to be involved with the people putting this thing on. I thought it was pretty cool: two cultures, two types of dancing. We only danced once, as the opening dance to start it off. It was really fun.

My favorite part! So this routine we performed starts out with the girls on stage with us guys off stage waiting. The girls do a short routine and then we come on and the girls go off, and then the girls come back for the last part of it. While the girls were doing their part I was on the opposite side of the stage, across from the Israeli dancers. It was really fun to see them all start groovin and bustin moves back stage to the music our girls were dancing to. I’m not sure why it was my favorite part, other than perhaps that I just enjoy watching people enjoy music, and I could tell that they were enjoying it. It’s even more exciting for me to see a bunch of dancers enjoy music, especially when they’re as good as they are.

During intermission I overheard someone telling someone else that while they were good dancers, the BYU folk dancers or something like that were a lot better at the Israeli folk dances. He did say that this troupe had more real soul and energy, but the BYU dancers have better technique, are more together, etc. etc. 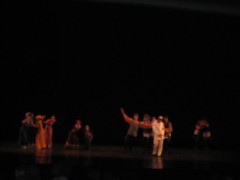 Whatever. My opinion is that the dancer with the most soul, energy, and true love for the dance is the better dancer. I don’t have anything against any of the BYU dancers and I’m not saying that they don’t love the dances they do and have a ton of energy, but it’s different. The BYU dancers are good, but I have a hard time believing that they’re better than this particular group of dancers just because they’re more together. I’d probably think they were too stiff, too together, overly choreographed, overly trained, and lacking what makes a dance real… at least in comparison. As an example, there are people who would say that they’re really good at swing dancing, but ask anyone who’s any good at lindy hop and they’ll tell you that they’re not.

Only the skilled can judge the skillfulness, but that is not the same as judging the value of the result. - C.S. Lewis Preface to Paradise Lost

So I’m not skilled in Israeli folk dances. I’m not sure the person who was saying that stuff is either, but he certainly knows more about it than I do. I do though like to think that I am skilled at lindy hop, so I think I can judge the skillfulness, at least on the surface.

What I do know for sure is that I thought they were great. Full of energy, passion, excitement, skill, and endurance. They must have been exhausted by the time it was over.

So what is perfection? To me, when it comes to dancing, perfection is skill combined with visible passion and the Havazalot Netanya dancers had both. Are there dancers “better” than them? Probably, but who cares? That’s not what matters. Too many people get so caught up in “perfection” that they forget to enjoy what they’re experiencing. I participate in a weekly public speaking club, Toastmasters, and I see the same thing there. People who are so concerned with “what a public speaker is” that they miss a lot of really good speeches.

Always strive for perfection, but don’t let it keep you from enjoying life’s simple pleasures.