What is exercise: Apparently it's more than I thought 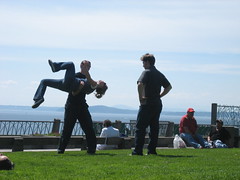 Me: i’m gonna go play ultimate frisbee! Her: nice! Her: i love that game! Her: i didn’t think you played anything athletic… Me: dude, lindy hop is athletic Her: no, it’s not. Me: is too! Her: dancing is not a sport. Me: so what… I get tired when I dance therefore it’s athletic. I am an athlete. Her: whatever Me: okay maybe not an athlete, but it’s still athletic. Her: uh huh

We’ve had this argument several times, and she still refuses to see my side of the story. I think she’s blinded by my obviously superior arguments.

For those who don’t know what lindy hop is, from wikipedia:

Lindy Hop is an African American dance that evolved in New York City in the late 1920s and early 1930s. It was an organic fusion of many dances that preceded it or were popular during its development, but was predominantly based on jazz, tap, breakaway and charleston. Lindy hop co-evolved with jazz music and is a member of the swing dance family. It is frequently described as a jazz or street dance.

I’m an avid “lindy hopper,” and like to go to events and competitions all over the USA (perhaps someday I’ll go out of the USA for dancing). Most recently, I went to Seattle, Washington for a camp called Camp Jitterbug. The photo is from that weekend. Anyway…

As I mentioned, I’ve argued several times with this friend that lindy hop is plenty athletic. I still think it is, but after going and playing Ultimate Frisbee last week, I’ve decided that lindy hop isn’t all that athletic after all. I thought I was gonna die running around on that green stuff called grass. Okay, I still think dancing is athletic, but it’s different. Very different. After nearly dying on the field I’ve determined that I’m in what experts everywhere would call “so out of shape you should be dead.” No, actually it’d probably be more along the lines of “moderately out of shape.”

Dancing has been, for the last few years, practically all of the physically demanding activity that I’ve done. I’ve hardly done anything else. I’ve played basketball a few times, gone on a few hikes, but mostly I’ve sat in front of a computer and gone dancing. Had it not been for dancing I doubt I’d have been able to make it across the field even once. Of course, had I not been dancing all the time maybe I’d have gone out and done other things.

Dancing is great, and regardless of what anyone else says lindy hop is (or at least can be if you dance fast enough) quite athletic. Maybe it’s more like aerobics. heh. I don’t know. Whatever it is, it’s really fun. But I also need to get out more and run around under the big blue sky. It’s really bright out there, but I hear you get used to it…