A few months ago I challenged a guy to a lindy hop battle just for fun. He counter challenged with another guy so it ended up 4 on 4 instead of 2 on 2. He also picked the song and the format of the battle. I can’t remember what the song is called. It’s used at Camp Jitterbug for some of their finals (it’s also in this video clip). It’s about 270 BPM and really sweet. It was a lot of fun. It was judged by the crowd and we ended up winning. If it had been judged by actual judges I think it might have been a different outcome, but that’s part of the fun of it! So this picture is us with the “Golden Goose” award. The idea is to have more challenges and have the Golden Goose get passed around. Funny though, I think it’s actually a swan, not a goose. Oh well, “Golden Goose” sounds better than “Golden Swan.”

I might upload the video and link it here, but no promises. Update 8⁄25: Find video here. 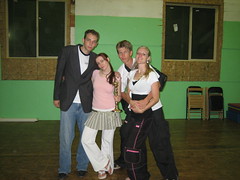