We live right behind Disney World’s Magic Kingdom and go to Disney World an awful lot. Mostly what we do there is walk around and eat, only occasionally riding a ride. This is changing as our baby grows, but for now we mostly still just walk, watch, and eat.

This list is our favorite places to go. In no way do I consider this to be the end-all, be-all Disney World food recommendation list, but if it helps someone out a little bit then that’s good enough for me.

I include both Yelp and Disney World links where possible.

Orlando area food recommendations are in a separate post. 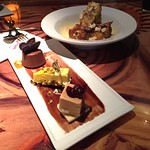 Sanaa (Official Disney World page)
The Yelp reviews about the bread service don’t lie. They have several types of naan with a large selection of dipping sauces. Our then 10-month-old loved it, too!

The Grilled Lamb Kefta was very good, but we thought the Lamb Kefta Sliders were better.

The Butter Chicken and Chicken Vindaloo are delicious. The Spicy Durban Shrimp is good, but really spicy. I like my Latin American cuisine super spicy, but when it comes to Indian food I prefer it more mild.

We liked the Dessert Trio, but weren’t huge fans of the Shahi Tukra (bread pudding).

The Mara (Official Disney World page)
This restaurant right next to the Uzima pool is one of our favorite quick service locations on Disney property. The Barbecue Chicken Flatbread and Vegetable Flatbread are our favorites, but the soups are pretty good as well.

Jiko - The Cooking Place (Official Disney World page)
We stayed at the Animal Kingdom Lodge to celebrate our 1st anniversary. Jiko turned out to be quite nice.

The flatbread was awesome. 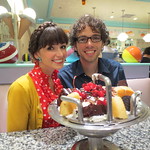 Beaches & Cream Soda Shop (DW)
The quality of the ice cream won’t blow you away, but the shop itself is fun.

The Kitchen Sink (pictured) is insane. Do not order unless you have a large group. Maybe not even then. The peanut butter creations are better.

You might assume Disney Springs has the most good food at Disney World, but you’d be wrong. Epcot has all the best food. And we still haven’t tried everything.

Le Cellier (DW)
Best restaurant I’ve been to on Disney property. Costly and hard to get into.

If you’re into Filet Mignon, theirs is delicious.

The potato cheese soup is awesome.

San Angel Inn (DW)
Best Mexican food I’ve had in all of Florida, though it was stupid expensive.

Pretty much anything at Epcot that costs $50 a person is going to be delicious, but ouch.

La Hacienda de San Angel (DW)
The slightly cheaper (but only slightly) version of San Angel Inn. The food isn’t quite as good, but still a solid win.

Nice views of the lake.

L’Artisan des Glaces (DW)
Best ice cream at Epcot (and all of Disney World except maybe the gelato at Disney Springs).

Tangierine Café (DW)
The Shawarma platters are quite good.

Sadly, the churros are not as good as Disneyland churros.

Food & Wine Festival (DW)
Hands down the largest selection of amazing food available in the Orlando area, but since the food changes a lot year to year I won’t make specific recommendations.

Okay, I lied. The pulled pork slider from the Hawaii booth (pictured) is excellent and has been there the past several years. Get one! Get three!

Usually runs from the end of September through early November.

Flower & Garden Festival (DW)
While not quite as awesome as the Food & Wine festival, it’s a close second and shouldn’t be missed if you’re around. The picture is of Mexico’s carnitas taco.

Usually runs from the end of March through the middle of May. 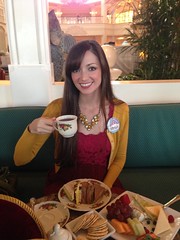 I will repeat what I wrote in my NYC food recommendations post about Alice’s Tea Cup:

To men who think they’re too manly for a tea house or some other nonsense: Man up. This place has delicious food.

The Writer’s Stop
Update: This place has closed, but Hollywood Studios still has the carrot cake cookie in a few places. Go forth and find it!

It’s more of a gift shop than a food place, but they have amazing carrot cake cookies.

Do not get the hot chocolate. It’s gross. Yelp reviews say the same about the coffee.

There is no amazing food here. There is also no good food here. It is sad.

If anyone has had really good food at the Magic Kingdom I would love to know about it.

Be Our Guest (DW)
The food’s not bad. Booked out months in advance, but the quick service option during the day may be your best bet for food. 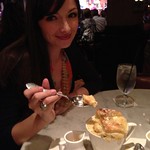 Live music and Irish dancing in the evenings, and I believe all day long on the weekends.

Earl of Sandwich
Fast (unless there’s a long line), inexpensive, and delicious. This is what other sandwich chains like Subway’s and Quizno’s dream of being.

Mariah likes the All American best while I like the Holiday Turkey, when available, and the Hawaiian BBQ or Chipotle Chicken Avocado when it isn’t.

Vivoli il Gelato (DW)
I spent some time in Italy in 2011 and ate a lot of gelato. I wish I’d known about the orignal Vivoli in Florence, which started making gelato in 1932 thanks to Raffaello Vivoli, but alas I didn’t know about it.

Thankfully, this shortcoming of my Italy trip has been partially rectified by the Vivoli family helping set up a second storefront in Disney Springs.

Their gelato is easily the best I’ve had in Florida. Don’t miss it.