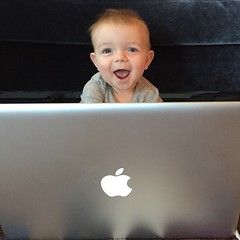 Seriously, I finished yesterday. I thought it was going to be easier to read a lot with a newborn. All they do is sleep, right? Oh man. The hilarity of that thought.

I was able to read a few books in the middle of the night when Jude (pictured) was brand new (April and May) while rocking him to sleep, but it wasn’t exactly what I wanted to be doing at 3 AM.

This list represents about 14,192 pages. Or, since I listen to a lot of audiobooks, only 6,011 pages plus 254 hours of audio. I listen to books at an average of 1.5x normal speed so the actual number of hours I spent listening to books is closer to 169.

I also re-read the following (and did not count them in the 35 books):

Partials (The Partials Sequence, #1), by Dan Wells
The Jester (The Riyria Chronicles #2.5), by Michael J. Sullivan
Harry Potter and the Methods of Rationality, by Eliezer Yudkowsky

Yes, I read (past tense) Harry Potter fan fiction. While I have basically no shame2, I will say this: it’s well written and hilarious. It was also the longest thing I read all year3. 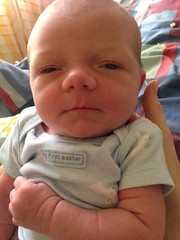 The picture on the right is Jude demonstrating his resolve to not let me read much for a while.

The Graveyard Book, by Neil Gaiman

The Night Circus is magical.

Blood Song (Raven’s Shadow, #1), by Anthony Ryan
The Crown Tower (The Riyria Chronicles #1), by Michael J. Sullivan
Calculating God, by Robert J. Sawyer
Creativity, Inc.: Overcoming the Unseen Forces That Stand in the Way of True Inspiration, by Ed Catmull
A Night of Blacker Darkness, by Dan Wells
The Cricket on the Hearth, by Charles Dickens

The Time Paradox (Artemis Fowl, #6), by Eoin Colfer
The Viscount and the Witch (Riyria Chronicles, #1.5), by Michael J. Sullivan
The Rose and the Thorn (The Riyria Chronicles, #2), by Michael J. Sullivan
Skin Deep (Legion, #2), by Brandon Sanderson
The Snow Queen, by Hans Christian Andersen
Visitors (Pathfinder, #3), by Orson Scott Card
The Power Of Less: The Fine Art of Limiting Yourself to the Essential, by Leo Babauta
Code: The Hidden Language of Computer Hardware and Software, by Charles Petzold
What If?: Serious Scientific Answers to Absurd Hypothetical Questions, by Randall Munroe
Wonder by R.J. Palacio