Truth be told, Orlando is The Land of Chain Restaurants and Tourist Traps, but we have persevered and found some good places to eat here.

I’ve tried to include locations unique to the area, but we haven’t found that many amazing and unique restaurants here so I’ve had to supplement with chains.

I’d love to hear your recommendations. Orlando covers a large area and we haven’t really even scratched the surface.

Habibi
Amazing Lebanese food. I haven’t had shawarma or falafel this good anywhere else in Florida. It was also better than a lot of shawarma and falafel I had in NYC.

I’ve only been once so far so I’ll have to see if it’s consistent, but I can’t help but recommend it anyway. 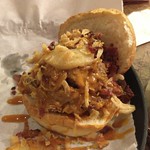 The “Mr. Smokey” (pictured) is my favorite. Mariah likes the “Holy Crap,” which isn’t BBQ, but still delicious.

The nachos are crazy awesome and eaily shareable with 6 people.

Arepa is a white corn cake. The arepica is arepa topped with hogao sauce, jalapeno relish, grilled vegetables, and queso blanco. You can get it with chicken, beef, or just veggies.

The restaurant is tiny. I believe there are two tables inside and maybe three outside.

Latin Square Cuisine
Pretty good Cuban food in the heart of Orlando. The Ropa Vieja is super popular, but I prefer the shredded pork.

There are a few small tables inside, but you’ll probably have to sit outdoors. 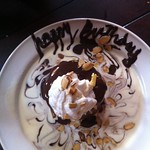 Bahama Breeze
A chain restaurant we like even though they got rid of our favorite appetizer.

Our favorite items are the cilantro crema chicken with mashed potatoes, their coconut shrimp appetizer, salmon, mashed sweet potatoes, the chocolate island for dessert (pictured), and the jerk chicken pasta (if you’re into mushrooms, which I’m not).

The desserts I’ve had looked better than they tasted. Except for the chouquettes. The chouquettes are delicious little things.

That One Spot
The best unique-to-Orlando burger I’ve had. I’ll even go as far as to say that it’s a better choice than Shake Shack if you want options. Shake Shack is delicious yet limited; That One Spot gives you more choices.

I love the “Bayou Burger” and Mariah loves “That Other Burger”.

Shake Shack
I love this place. It’s not unique to Orlando, but it’s better than any other burger I’ve had in the Orlando area.

Five Guys
Also in no way unique to Orlando, but given that it’s better than everything else here except Shake Shack and That One Spot, I have to include it.

Burger 21 has a lot of options, including good vegetarian burgers.

Beth’s Burger Bar
Update: This place has been closed.

A decent burger if you’re in the downtown area and want a burger.

The Dessert Lady
Update: The Dessert Lady locations have shut down, but she still takes orders from her website and over the phone. Although, as of February 2019 the website’s SSL certificate has expired. :(

Her carrot cake with cream cheese frosting is excellent. Its complete lack of raisins and nuts makes it even better.

The Big Cheese
Mariah loves “The Honey Brie” sandwich. My favorite is the “Mac ‘N’ Pork”.

The french fries are also quite good. Crunchy on the outside and nice and soft on the inside.

Mayan Grill Food Truck
Pupusas! I love pupusas so much it hurts.

The Yum Yum Cupcake Truck
Update: This food truck is no more. 😞

Maybe you think cupcakes are overrated. If so, that’s cool. For the rest of you, try the churro cupcake. It’s like a churro, only it’s not a churro because it’s a cupcake.