Why I'm driving a rental car

I was driving to a dance in Logan, Utah, listening to Artemis Fowl, book 2 in audio book format from audible.com on Friday night. I was in Sardine Canyon, in a section of the canyon containing signs that said “deer migration area next 3 miles.” I didn’t actually see those signs that night though. Speed limit was 60 MPH. Out of the corner of my eye I saw 2 deer. At least I think it was 2 deer. Maybe it was only 1. I slammed on the brakes, but it was too late. 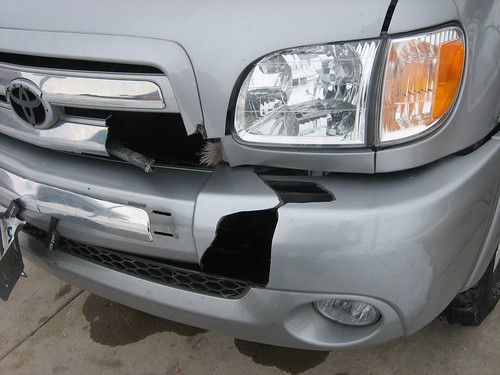 The deer was lying in the middle of the road, not in traffic. It was very dead. I looked at the front of my truck, saw that the radiator was hissing from what looked like a dent. It didn’t seem to be gushing radiator fluid so I took off, hoping I’d get to Logan without the engine overheating. I kept my eye on the temperature indicator and it never moved at all. I got to the dance and got out and looked again in better light. The radiator was still hissing, but nothing was dripping on the ground. I parked and turned off the engine. It was then that all the radiator fluid decided to leak out. I guess something about the circulation in the radiator kept it from leaking while it was running? However it happened, I’m just glad it didn’t leak until I got to where I was going.

I spent all of Saturday morning and most of the afternoon on the phone with State Farm insurance. I have to pay a $100 deductible and get a paid for rental car to boot (time will tell if this will make my rates go up). Logan is a small city and all the auto repair shops were closed. I called the Toyota dealership in Logan and found out what repair shop they use and with the help of a friend’s dad I got it towed there. I just left it in their parking lot and worked everything out over the phone this morning. Finding a rental car was quite difficult. Everywhere was either closed or completely out of cars! I finally found a car at Avis. I drove home in a nice Hyundai Sonata. I took the pictures on Saturday.