Nothing beats a nice day on the lake

Not long ago a few friends and I decided it was time we took a fishing trip. We planned on leaving Friday, June 29th at 5 PM. The plan was to drive out to Pelican Lake, a small lake about 25 miles from Vernal, Utah, set up camp, maybe do a little fishing, go to bed, wake up and fish all day and head home Saturday evening. But since when do you actually leave on time for a road trip? When you’ve got a flight to catch it’s a lot easier to be on time, but when you’re driving, it’s far more likely that you’ll leave behind schedule. Such was the case with us. We ended up leaving about 7:30, only to realize we’d forgotten something so we went back and didn’t get on the road again until around 8:30, and then we had to go pick up some other people so we didn’t really get going until 9:30.

Oh but it gets more fun! We got to Roosevelt, Utah and stopped at Crumbo’s Sinclair gas station to ask for directions. Two very helpful men at the gas station gave us good directions and we headed for the lake. If it had been light outside we would have seen a road sign, but it was dark and we missed it completely. We drove around the lake for 1 1⁄2 hours looking for the camp ground. Below is a beautifully colored map of our travels around the lake. The key in the bottom left corner explains the colors. The color blue got mostly covered by the other colors at the top right of the image despite my efforts not to cover it. Also, the key is sort of hard to read because I saved the image, closed everything, then realized I forgot to mark the “X” in the image so I opened it up again and added that, which degraded the quality and I wasn’t about to do it all over again. blah blah blah, here’s the map: 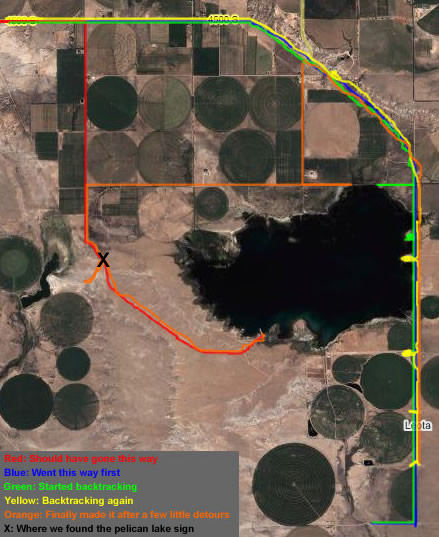 We really had no idea where we were going. That is, until we got to the “X.” At the “X” we found this huge road sign: 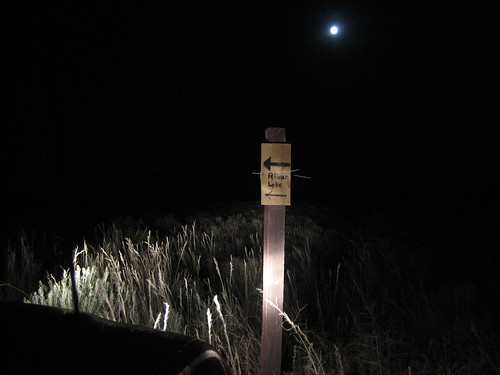 We had a good laugh, figuring that this was the only sign and that it was ridiculously inadequate since we’d been lost for so long. It wasn’t until Saturday evening when we were heading home that we saw the bigger sign on the main road. Oh well. This sign is still funny.

I bet most people, upon seeing the sign pointing to the left, would go left. We, naturally, went right. Why? Because we’d been told on the phone that when you get to a fork in the road, the boat dock is one way and the camp grounds are the other way. This, however, was the wrong fork in the road and we quickly discovered that when we ran into a locked gate.

I probably should have added another color for “driving around looking for a camp spot we liked,” but the map I already drew will have to do. We built a fire, put some chili on the coals, roasted hot dogs, had chili dogs, set up camp, and went to bed.

The next day was beautiful, but really hot. We were all up by 7 AM, but it took us a long time to get everything taken down, to get our fishing stuff ready, and to eat breakfast. We got on the lake by 9 or 10 AM, and stayed out there until about 8 PM. My face and arms got torched (sunburned).

We were told by many before we got to the lake, and while at the lake that a good day of fishing there will yield about 80-100 fish caught per person. We only caught about 30-40 per person, which the Camp Host said was better than anyone else he’d seen come off the lake that day. We kept about 30 of them and are going to have a fish fry today or tomorrow. 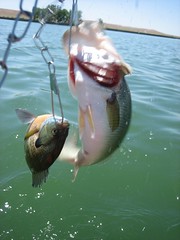 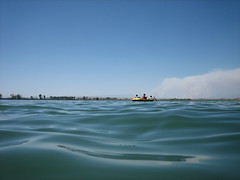 We got home late and after filleting the fish (my friend did it all) it was after 3 AM and we were all super exhausted. We wondered if it was really worth it with all the driving around, getting sunburned, and getting home really late, but I think it was. If we ever do it again we’ll plan better, get off the lake in the middle of the day when it’s really hot, use more sunscreen and go for more than a day.

← Persistence is Hard Before you have Persisted
Serenity →
Posted by Ryan Martinsen July 2, 2007