About a month ago I went to the so-called LA Lindy Exchange. I say so-called because it wasn’t much of a lindy exchange. It was more like I was there on a normal weekend with a few other people from out of town. That’s not necessarily a bad thing, it’s just not what I had expected. In fact, one could say it was more like the first lindy exchange than anything else. The very first lindy exchange happened when a group of Chicago lindy hoppers went to San Francisco for a weekend a number of years ago. The Chicago dancers just enjoyed the local venues as they normally function. Most lindy exchanges now are too large to be held at the normal venues. I think that’s good and bad. I love being able to go to cool venues with tons of people, but it’s also nice to be able to go to the normal dance venues and get a better idea of what the scene there is really like.

If I had just been there for the exchange, and the exchange alone, I wouldn’t have had as much fun as I did. My friend Jonathan and I stayed in LA with my friend Vi. Vi took us all over and we were able to enjoy several beaches as well as Disneyland (thanks to a family friend of Vi who got us in for free)! Good times were had by all! 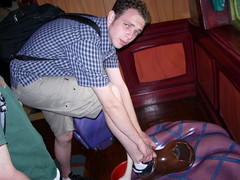