How to Not to Face Fear (Like a Dead Deer)

You know that feeling you get when you climb up the steep side of a mountain or big rock without any safety equipment? If not, it’s something of a sinking, oh-my-gosh-I’m-going-to-lose-this-tetris-game sort of feeling, except more serious and in reverse (because in real life you want to reach the top and in tetris you don’t). If this feeling were verbalized it would sound something like, “I sure hope I can keep going up because if I have to go back down photos of my broken body will end up in email forwards about the dangers of being stupid. And I can’t have that. I hate email forwards.”

I went rock climbing two months ago near New Paltz, NY, about an hour and a half north of NYC. Well, the intention was to go climbing anyway. What actually happened consisted more of scenic routes, collecting acorns, pretending to be hung by a rope (would also have ended up in email forwards had it gone badly), and a lot of staged photo opportunities than actual rock climbing.

There were three of us, one of whom was camera-happy. I like having camera-happy people around. It means adventures get documented. I almost always forget to take pictures. The problem is when the person with the camera slows everyone down. Which is what happened on this particular climbing expedition.

Naturally, we got sick of waiting.

So we started exploring the rocks. I found a large, pitch-black cave that needed exploring. Except it wasn’t really a cave. It was just a bunch of massive rocks piled on top of each other that formed lots of dark crawl spaces.

You know that feeling where you know your mother probably wouldn’t approve of what you’re about to do, but you know you’re going to do it anyway? Yeah, me too.

In another moment down went Alice after it, never once considering how in the world she was to get out again. - Alice's Adventures in Wonderland, Chapter 1

This particular hole in the pile of massive rocks didn’t turn out as exciting as we’d hoped: no endless rabbit hole, no dead bodies. It didn’t even stay pitch-black for very long. All it did was go up. The problem was that it looked a bit too risky to go up, as did going back down the way we had come (not to mention that admitting defeat would be disastrous to my inner mountain man pride).

I managed to find a crawl space that looked just big enough for someone slightly smaller than myself. Maybe I can get out this way! Either that or it’ll dead-end in an impossible to get out of hole? Awesome.

As I started squeezing through the small hole at an awkward angle my friend Ladd commented, “I sure hope there’s not an earthquake.”

I laughed, agreed, and continued on my way, but then noticed my brain trying to freak out. I don’t get claustrophobic, but my mind/body/conscience/whatever was trying to tell me I should.

Ridiculous. I’m not claustrophobic. I’m not really in any danger.

That’s what I told myself. And it worked. Sure, I couldn’t actually turn my head, or take deep breaths in some spots due to the lack of space between the rocks, but whatever. Who needs breathing room as long as the way ahead appears to offer a way out?

Anyway, the point of this is that, while what I was doing wasn’t necessarily the most rational thing to do, listening to fears after getting into the mess would have been more irrational than the original irrationality.

Deer and other animals do this all the time: 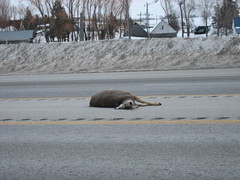 The next time you get yourself into a sticky situation and you feel yourself trying to panic, don’t. It doesn’t help.