Pearls before Breakfast, Lunch, and Dinner

1.5 years ago I came across an article in the Washington Post describing, in great detail, a musical experiment. The article is called Pearls Before Breakfast, the experiment was to see if one of the greatest musician’s could distract people from their rush to work in a D.C. Metro station.

The musician behind the experiment was Joshua Bell, an utterly amazing violinist. I read the article (it’s long) in amazement. I wondered what I would have done in the same situation: you’re in a hurry to get to work and hear some amazing music. Do you stop and listen or plow on? 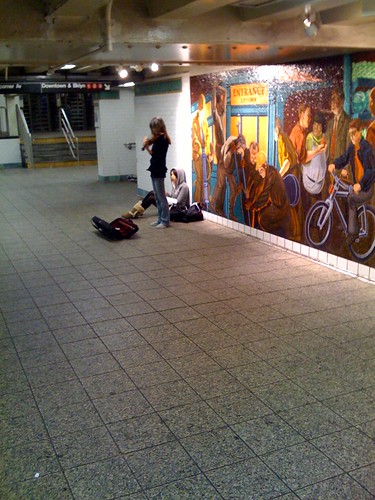 I took this photo on Nov. 1st, underground in the New York City subway. It was late Saturday night, I wasn’t in a hurry, and it wasn’t very crowded. Still, I almost walked right on past. I caught myself and thought about the Washington Post experiment. I stopped and listened for a few minutes. She was good—not as good as Joshua Bell, but good. I’m glad I stopped to listen.

I had a lot of opportunities to stop and listen in New York. Sometimes I stopped, sometimes not. When I didn’t I was either in a hurry or the musician wasn’t that great. I wanted to stop whenever the musician was good, and tried to listen as long as possible even if I didn’t feel like I could stop.

While questions like “what would I have done?” are important, they’re much less important than the here and now. I believe that one of the most important questions we can ask ourselves is “what will I do?” I’ll never know how I would have acted had I been in that D.C. Metro station that day, but I can decide what to do in similar situations. The key is remembering what we’ve decided when the moment arrives.